Despite the cold weather in Charlotte, the red carpet outside of The Community Outreach Christian Ministries was on fire with some the area’s most talented entertainers. The Queen City Awards celebrated its ten year anniversary on Saturday December 10, 2016 with celebrity appearances, jaw-dropping live performances and rewards of some of the most elite talent hailing from Charlotte NC and surrounding areas. 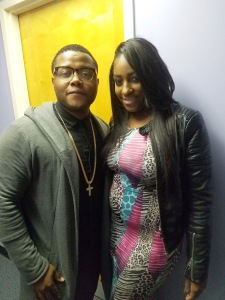 New York native, Paris was excited to attend in support of her friend Sunshine Anderson. Paris was a an award presenter and strutted to theme song “Brick House” as she exited the stage. The DJ’s selection was perfect for Ms. Paris’ gorgeous and curvy frame.

Sunshine Anderson, her mother and daughter gave a regal vibe on the carpet, capturing three generations of beautiful and strong black women. Sunshine looked absolutely flawless in her lace and leather dress courtesy of The Top Drawer, a Charlotte based women’s clothing boutique. Sunshine is also reportedly working out with guest Celebrity Trainer, Sonya D and it showed because she looked amazing! Most notably, Anderson has been a constant supporter to the Hurricane Matthew victims in Fayetteville this past September.

During the her acceptance speech for the “Trensetter Award”, Anderson expressed the many award nominations received for her hit record Heard it All Before have received during her career; including nomination for a Grammy in UK. She expressed how different the Queen City Awards was because of hometown recognition and her support from her people.

Sunshine’s schedule is booked with national touring and yet another trailblazing venture many don’t know yet; as a licensed cosmetologist, Sunshine will be opening a salon soon. The Trendsetter Award was definitely much deserved and to top it off American Idol contestant Ashley Smith performed an awesome tribute of Anderson’s hit song, Heard it All Before.

Every genre of music, media and other categories of entertainment were recognized at the awards. From Folk, to R&B, Hip Hop and also a special nomination for Pink Illuminance  for “Publication/Blog of the Year” the awards gave a platform for the brands who work diligently on their dreams not to mention the fire-blazing performances from some of the city’s hottest dancers.

Host Cedrice Brown aka Nuffced kept the crowd entertained with his jokes and dance moves. Notable Kevan Glover, the award’s Founder and local Philanthropist, has done an awesome job putting together this awards show for the last 10 years. I spoke with Glover briefly after the show. He was elated about the success thus far with the awards. When asked about expanding to other cities, He stated

I would like to see it expand and operate in comparison to the Source Awards. As you remember the Source were held in multiple cities. An expansion would be huge for North Carolina as there is so much underground/unsigned talent.

10 years down for this amazing star studded production, and I pray many more to come. I’m already looking forward to next year!

Click here to learn more about our fabulous guest blogger Kei and to find more of her work!